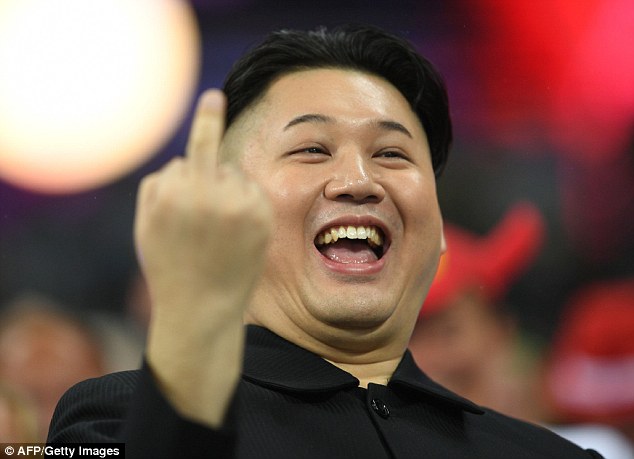 Here it is and it is so simple.

In dealing with the problem of North Korea, we’ve been thinking in the wrong way. Everything has been focused on a military response, bombs vs. bombs. Bombast vs. bombast. Clearly, this does not work. We are slithering into a very nasty place. What would work in defusing the entire situation? Now, this is going to sound insane, but the world is insane and this strategy has ironclad logic behind it.
What does the little pig in NK really want? I mean personally. Has anyone asked that question? He’s young. He has total power in his pitiful country. There’s nothing for him to conquer there. What does he really want? I’ll tell you what he wants. He lusts for FAME. CELEBRITY. Not the fleeting moment of it that comes when he fires a missile into the soup. He wants what everyone wants, to be a STAR. Do you see that? Isn’t it absolutely clear? And he loves movies.  He loves video games.  He loves Disney, for pity’s sake.

The key to his destruction isn’t in the Pentagon. It’s in Hollywood. Give him his own TV series. The Apprentice of North Korea. Or an NK version of Star Trek with Captain Un. He’s not going to blow up the world if it would mean blowing up his audience. And I promise you something, the American audience would EAT IT UP. It’s a win/win. A major faltering network would have a new tent-pole show that would give them the night. And the strategic benefit? Stardom would mean the beginning of the End for Un, just as stardom has been the end for so very many others.  He could shriek and rant at studio and network executives instead of nations.  He could produce, direct, act. What’s he going to do if he doesn’t like network notes, nuke the studio?  They’re used to those kind of threats from talent.
So who would watch this magnificence on the screen?  You would and you know it.  I would too.  So would everyone who has been watching the Kardashians.   Which means everyone in the entire world. Wouldn’t you rather have  another horrendous network TV sitcom than nuclear war?  And think about this:  The little pig is already the head of his country.  We wouldn’t have to worry about him becoming President.

(The awful, frightening thing is, in our asylum world, I think this would really work.)