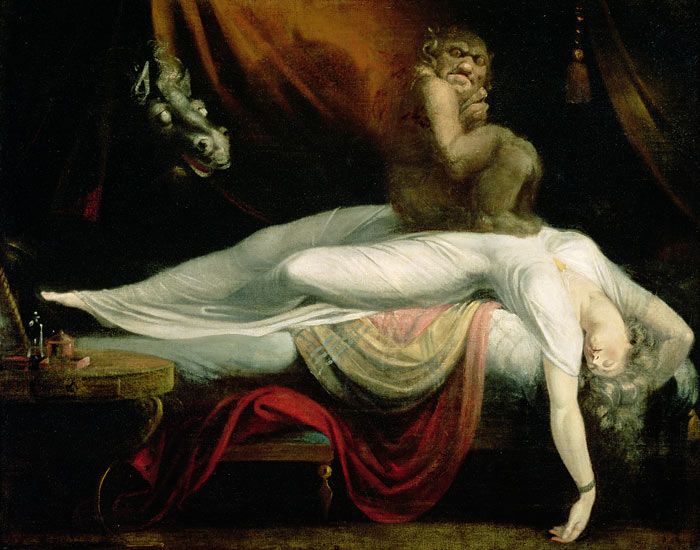 I’m going to give over this edition of my blog to my wife, Carel Gage Luck. I hope you find her article of interest and, perhaps, of help.

I wrote this column a number of years ago, but feel it might be of help to people today.

There is a book by David J. Hufford entitled, The Terror that Comes in the Night. The sub-title of the book describes the contents as: An Experience-Centered Study of Supernatural Assault Traditions. According to Hufford’s research about a sixth of the population experience the phenomenon described in his book yet almost no one talks about it. The experience Hufford describes is similar to what has become known in our culture as the “alien abduction” experience, yet differing in some aspects. According to the Roper Poll done in 1992 at least two percent of the adult population have experienced being abducted. It is difficult to get an exact number since it is believed that many people completely repress the experience and many other just don’t talk about it.

The Roper Poll used a sample of 5,947 respondents corresponding to the equivalent number among the 185,000,000 ostensibly represented by Roper’s demographically balanced sample. The margin of error is + or – 1.4 per cent. The poll excluded everyone under 18 years of age and all residence of Hawaii and Alaska, as well as all residing in dormitories, hospitals, etc. When respondents were asked if they had ever awakened paralyzed with a sense of a strange presence in the room 18 per cent said yes. This percentage with a + or – 1.4 margin of error represents 33,300,000 people.

In 1973 Coleman and I and our two baby boys lived in Virginia. Coleman was working for Christianity Today magazine as the advertising manager and I was a stay-at-home mom doing some freelance artwork. One night I woke up instantaneously. My eyes flew open like the close-up in a horror movie when the dead person comes back to life. I was totally awake with the sense that something was very wrong. That sense moved very quickly to terror. I was paralyzed, unable to move anything except my eyes. To my left, over my husband’s sleeping body, I could see three figures gliding into the room. Their feet, which I couldn’t see because a monk-like robe covered them, never touched the ground. They were coming out of the walk-in closet and my first thought was, “How did they get into the closet?” It was communicated to me in some fashion – I don’t know how – that they had come in the large second story window in the nursery, glided down the hall, gone through the wall into the master bath, and from the bathroom had glided into the closet. I knew they were very, very angry with me for some reason, but I didn’t know why. They communicated to me, without speaking, that they were going to levitate my stiff body, slam me through the window above our bed and drop me on my head killing me. They wanted me to know that my husband would be blamed for my death.

I had no doubt that they were capable of doing this and my terror escalated. I tried to scream at Coleman to wake up but I couldn’t. My vocal cords were paralyzed. Then I began to pray. I tried to call out, “JESUS.” Again nothing would come out of my mouth other than grunts. Once more I tried to say “JESUS.” More grunts. Finally a garbled “Jesus” came out of my mouth. At the name of Jesus the beings dissipated into the air into little triangles just like a visual effect.

I immediately woke Coleman and told him what had happened. After comforting me the inevitable question came. He said, “Are you sure it wasn’t just a bad dream?” Irritated, I replied, “Yes, I’m sure. Because if it was a bad dream I’m still dreaming. I awoke before it began and I have not awakened since. Besides I just KNOW it was real.” At the time, neither one of us knew what to do with this experience, so I just filed it away and didn’t talk about it again for about 20 years.

Then about twenty years later Coleman was writing a pilot for a television series that was supposed to be about all sorts of strange phenomena. He gave me a book on alien abduction and asked me to read it and see if there might be any story ideas in it that he could use. As I read the book it struck me how similar these people’s experiences were to mine. Then I came across a drawing of one person’s alien abductor. It was eerie. He had drawn the same beings that had come into my room.

At the same time I was reading a book about several different missionaries that had gone to a variety of Third World countries. The book was entitled, Demon Experiences in Many Lands published by Moody Bible Institute in Chicago in 1960. In the preface we find this statement by the publishers: “It has been many years since any serious study of demon experiences has been published, and possibly never before a compilation from competent observers in many part of the world. The reason for this omission is not clear, but the results has been a feeling on the part of many Christians that these strange (to us moderns) phenomena were only valid in Bible times.”

Several of the missionaries had this attitude themselves when their story begins. Most were totally unprepared for the assaults that they and their new converts would confront. Several of these experiences were very similar to the ones described in Hufford’s book and countless alien abduction books. A conclusion from Hufford’s book is that people unfamiliar with any notion of what he calls an “Old Hag tradition” describe their symptoms precisely in accordance with those aware of one. All of these missionaries came to the same conclusion. They believed they were dealing with demons. Each looked to the Bible to learn how to deal with them.

As I began to form my own opinion about my night terror experience I went to the Internet to see if anyone besides myself had a similar experience. Was I the only person who has used the name of “Jesus” to end a night terror or alien abduction experience? I found an article from Florida Today magazine for August 17, 1997, written by Rita Elkins concerning alien abduction and it’s similarity to demonic oppression. She quotes Joe Jordan, a director for the Mutual UFO Network (MUFON) a clearinghouse for UFO related research. When he is not checking out UFO claims for MUFON he works in product development and engineering for Sea Ray Boats. He and his partner Wes Clark, also a member of MUFON, who is a quality control engineer at the Kennedy Space Center, have, through their work at MUFON, come across several people who have been able to stop their abduction experience by calling on the name of Jesus. He shared a taped interview with Elkins for her article in Florida Today:

Jordan punches buttons on a tape recorder. A nameless, 30-something man with an intelligent-sounding voice, slightly Southern, tells his story. Calmly at first.

“There were strange lights in a nearby woods at bedtime, barking dogs.” He is up and down a few times; yelling at the dogs while his wife sleeps soundly. Then lying down again…”I couldn’t move…grey fog. I couldn’t see anything, but it was like someone was here.” He felt himself lifted off the bed. “I was terrified, so helpless… screaming inside, but I couldn’t get it out.”

The voice is less calm now, but still certain, not hesitant.

“I thought I was having a satanic experience, that the devil had gotten hold of me and had shoved a pole up my rectum and was holding me up in the air…so helpless. I couldn’t do anything.”

A non-religious person, he’d been to church with his wife a few times.

“I said, ‘Jesus, Jesus, help me,’ or ‘Jesus, Jesus, Jesus!’ And when I did, there was a feeling or a sound or something. That either my words that I had thought or words that I had tried to say or whatever, hurt whatever was holding me up in the air on this pole. And I felt it was withdrawn, and I fell. I hit the bed, because it was like I was thrown back in the bed. I really can’t tell what it was. But when I did, my wife woke up and asked why I was jumping on the bed”

Elkins goes on to say, “Relentless anonymity is given in abduction research. Nobody in their right mind wants family, friends and co-workers to know they’ve had their personal space violated against their will by strange-looking creatures whose existence isn’t even proven.”

Jordan told Elkins that three other researchers had had similar cases. They had not revealed this because they felt it would hurt their credibility, especially among the folks that invite them to speak at UFO Conventions. I certainly can understand this. A number of years ago, Coleman and I went to a UFO Convention in San Francisco. Most of the people there were defiantly New Agers and didn’t seem to be open to traditional religion at all. In spite of the fact that abduction experiences are described as horrible, brutal and denigrating many believe they are done by good aliens and somehow beneficial to human kind. So my question is, “Do you really think our alien space brothers are assaulting us or could there be a demonic connection to these experiences?”

You may be wondering why I have decided to share my night terror story with the world on the Internet. I am sure that there are many who will just think I am a total whacko. Some of you who know me may think I am further gone than you realized. But if there are people experiencing these assaults who want them to stop, I can offer hope.

My younger son was taking a college class at a secular university. The teacher of this class, which was a language class and had nothing to do with what I am writing about today, began asking the same questions that were asked in the Roper Poll. After a few questions, one girl raised her hand and began to tell the class about her abduction experience. When she had finished, my son said to her, “There is a way to stop these experiences if you want to.” The teacher interrupted, “No there is no way to stop them!” “Yes!” my son replied, “They can be stopped.” “No they can not. We have to get back to our subject.”

I want people to know that my son’s teacher is wrong. There is a way to stop these experiences. Please don’t think that I am saying that the name “Jesus” is magic. It is not magic, but it does have power. The power is based in belief. The Creator of the Universe knows his children. The Good Shepard knows his sheep. Surely if he was willing to die for our sins, He is able to protect us from the Evil Ones. Put your faith in Him.

If you have experienced a night terror I would like to hear from you. Tell me your story.  carel@sti.net